I have a black dress with a beautiful flower print, three quarters sleeves, midi length. I call it my 90s dress. As in “a dress to wear in my 90s”.

I picture myself in my mid ninetees wearing it with an orange scarf, a flirtish small purse, mid heels, by my partner’s arm, heading to my daughter’s house for an afternoon picnic.

This is my pledge. A pledge to a long, healthy, happy life, surrounded by people with whom I share a commitment to nurturing. I love the feeling this pledge gives. It makes me grateful and wise about how I use my life resources.

I once met a psychiatrist who cautioned me about the way I use my resources, in a period I worked for five big clients simultaneously, under tough tight deadlines. A did not know the word No at that time. From an Yes person, I turned into a robot. The psychiatrist asked me to pay a visit to her hospital. Seeing Mentally alienated people was an wake up call. It showed the bottom which brought in the salvaging perspective. The mind is a servant. Put it to good use and it will serve you. Make it run endless, meaningless errands and it will rebel. Payback time will get tough. The bottom will be quick to hit. Regaining balance will be challenging.

Back to my dress. It was on my “to donate” list. Until its orange flower print gave me that sense of perpetuation. Was it its stand-out orange pattern, with its energising sunny colour? Was it the contrast between black and orange as in a competition for a bet on the bright side of the life? It can be both. It regained now a prominent place in my wardrobe. This pledge is printed out, folded and kept in my diary, as a claim made with an open heart and humility to a long, healthy, prosperious, loving, fulfilling life for the good of all.

It is simpe and beautiful and worth sharing.

People often tell Regina Brett how great she looks for her age. Turns out, she is actually 54 years old — not 90. She wrote down these life lessons the night before her 45th birthday after being diagnosed with breast cancer. Over that past decade, these lessons have gone viral on the Internet amid claims that she is 90 years old. Luckily, she finds humor in this misrepresentation, knowing how many lives she has touched.

Whatever her age might be, these universal lessons are relatable to anyone who needs a little reminder of what’s important in life.

Life isn’t fair, but it’s still good.
When in doubt, just take the next small step.
Life is too short to waste time hating anyone.
Don’t take yourself so seriously. No one else does.
Pay off your credit cards every month.
You don’t have to win every argument. Agree to disagree.
Cry with someone. It’s more healing than crying alone.
Save for retirement, starting with your first paycheck.
When it comes to chocolate, resistance is futile.
Make peace with your past so it won’t screw up the present.
It’s OK to let your children see you cry.
Don’t compare your life to others’. You have no idea what their journey is all about.
If a relationship has to be a secret, you shouldn’t be in it.
Life is too short for long pity parties. Get busy living, or get busy dying.
You can get through anything if you stay put in today.
A writer writes. If you want to be a writer, write.
It’s never too late to have a happy childhood. But the second one is up to you and no one else.
When it comes to going after what you love in life, don’t take no for an answer.
Burn the candles; use the nice sheets; wear the fancy lingerie. Don’t save it for a special occasion. Today is special.
Overprepare, then go with the flow.
Be eccentric now. Don’t wait for old age to wear purple.
The most important sex organ is the brain.
No one is in charge of your happiness except you.
Frame every so-called disaster with these words: “In five years, will this matter?”
Forgive everyone everything.
What other people think of you is none of your business.
Time heals almost everything. Give time time.
However good or bad a situation is, it will change.
Your job won’t take care of you when you are sick. Your friends will. Stay in touch.
Believe in miracles.
Whatever doesn’t kill you really does make you stronger.
Growing old beats the alternative — dying young.
Your children get only one childhood. Make it memorable.
Get outside every day. Miracles are waiting everywhere.
If we all threw our problems in a pile and saw everyone else’s, we’d grab ours back.
Don’t audit life. Show up and make the most of it now.
Get rid of anything that isn’t useful, beautiful or joyful.
All that truly matters in the end is that you loved.
Envy is a waste of time. You already have all you need.
The best is yet to come.
No matter how you feel, get up, dress up, and show up.
Take a deep breath. It calms the mind.
If you don’t ask, you don’t get.
Yield.
Life isn’t tied with a bow, but it’s still a gift.
If you want more inspiration from Regina Brett, check out her personal website! 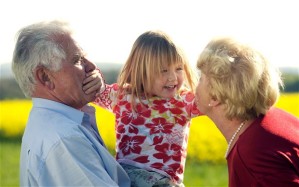 – What’s hard, Maria?
Her daughter gave birth last week. Both mom and baby are fine.
– Nothing of what I do, pleases her.
Tears rolling.
They new family leaves with Maria. One roof, same walls.
Sobbing transforms into convulsive weeping. A hug is chasing it away.
– It’s the hormones and fatigue, Maria. Give her some time.
– It’s so hard. None of my advice or help is well received. I raised three kids and never followed a diet, or supplemented breast milk with formula….
– Give her some time. Be there when she needs you. It will get better, you’ ll see. It’s her experience as a mom now.

…. I made a mental note, a reminder to myself and I plan to stick to it. New moms need to learn and experience motherhood the way and at the pace they feel it. It’s their body. Their baby. Their decisions and their consequences. Being a mother does not automatically and for life make you “The expert-mom”.
I’ve seen women replacing their daughters as mothers and assuming full responsibility for a while. But a time comes when the mother will claim back her role and status. Or the child will want his bond with his mother to be real. What will the grandmother’s role be then? Substituting, even if through advice only, hits back, no matter how nobel the intentions were.
Found many reasonable insights in Melinda Blau’s article “Four difficult truths about your grand children’ parents”, link here
http://www.huffingtonpost.com/melinda-blau/overcoming-4-difficult-truths-about-your-grandchilds-parents_b_5651560.html?ncid=fcbklnkushpmg00000037
The ultimate objective is to have happy kids, happy parents and happy grandparents. Ego’s aside, “know it all” attitude will stay on my way to grandparent happiness. There are hundreds of ways to do dishes. There are hundreds of ways to embrace parenthood. I will face my insecurities without burdening my child. Grandparenting is not about compensating for whatever I missed or skipped doing as a parent. As grandparents, we owe this understanding to ourselves and our children, who would love a role model of wisdom and family balance and happiness. This is what grandparenting is ultimately about.

Standard
My “Read all Nobel Prize in Literature” project brought me to end of eighteen – beginning of nineteen century America. It’s been a long-long time since I did not want to put a book aside. It might be my master studies compelling reading of academic papers. Still, I enjoyed the novel immensely. Steinbeck got his Nobel prize in literature in 1962.
Steinbeck looks at the birth of the American society through the lenses of a number of families, both native and new-comers, all with their joys and dramas. The scale of historical richness along with insights into human nature is one of a kind. It makes you cry, it makes you laugh, it makes you sad, it makes you happy.

To me, the central theme of the novel is the human soul’s search for happiness. What is considered one of the novel’s flaws – not sticking to the story of one of the families feature, i.e. the Trasks – becomes its virtues, in my eyes, due to the panoply of the human spirit unveiled: from the mysteries of man-women un-shared love, parents- children relations, strengths of a good marriage, cultural clashes, moral dilemmas of war and business, master – servant relations, further into the mystery of brotherly competition for parent’s love. Steinbeck uses the biblical story of Cain and Abel as the symbol story of the human soul. His description of the nature of human feelings from fear to rejection, from rejection to anger, from anger to revenge through crime, from revenge to guilt amounts to the story of mankind.
Cathy, one of central characters, is the drama of a revengeful soul who’s preferred story in childhood was Alice in Wonderland and who ends up facing her own reflection in her son whom she abandoned as a baby and who, 17 years later, rejects her with hurt, bewilderment and despair, feelings she thought she was good at hiding. Some might find it depressing. I think it is eye-opening and a wake-up call. I loved to find the fine lines between Oriental and Western thinking brought in by the interactions between Samuel, an Irish man, Adam, an original American, and Lee, a Chinese servant. To me, acceptance of things, as they are, is that fine line. “Within itself, if you do not hold it up to the other things for comparison and derision, you’ll find slowly surely, a reason and logic and a kind of dreadful beauty. A man who can accept it is not a worse man always, and sometimes is a much better man” is one of my favourite quotes from the book.

I loved that Steinbeck ended the book on a positive note, with a parent’s blessing on a child’s soul in search of love and happiness.